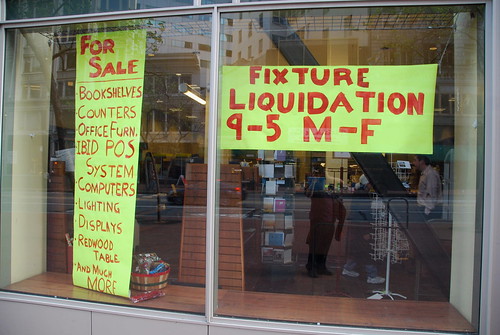 My title - The Last Bookstore on Earth - sounds like science-fiction. In 2021, it is sci-fi future thinking, but it might well be true in 2071 and I wouldn't be shocked if it turns out to be true much sooner. We know that physical bookstores have been closing ever since Amazon and the age of online booksellers began.

This past weekend was Independent Bookstore Day and brick and mortar bookstores still have ardent supporters - me included - but it's tough to keep a store going just selling books. The pandemic didn't help them, but the pandemic did help online book sales.

There is a whole bookshelf worth of "the end of" books. I have read three: The End of Everything: (Astrophysically Speaking), The End of History, and The End of Science. Of course, all those things are still going

Some young people may not know that Amazon.com started as a bookstore, but it fairly quickly expanded and now (especially by using third-party suppliers) it seems to sell everything and threatens not only bookstores but all kinds of stores.

My inspiration to write today came from watching the documentary The Last Blockbuster on Netflix. It tells the story of Blockbuster Video, the video rental company that put many independent video rental stores out of business. One way it did that was by making distribution deals with film studios.

It is an interesting history because movies on video were at first seen as a threat to movie theaters. That initial fear turned out to be less threatening than first thought because there were still plenty of people who wanted to see movies on a big screen and when they were released rather than months later when they hit video. This path has been traveled again, especially in the past pandemic year, with closed theaters and greatly increased streaming video use.

There were several indie video stores in my neighborhood when Blockbuster opened a large store. The indies could not compete with the wide selection and many deals. (About the only thing the indies could offer was pornography which was not in Blockbuster.)  Blockbuster had made revenue-share deals and so could negotiate lower prices than their local stores in exchange for a cut of the rental fees.

There is a nice irony in The Last Blockbuster being released by Netflix which wiped out the video stores of all sizes and helped wipe out the DVD market too.

But Netflix doesn't own the streaming business anymore. Hulu, Apple, Disney and Amazon Prime are examples of services that not only offer subscriptions but also additional rentals and, most significantly, are funding original content that they will own exclusively. Media companies, such as CBS, Paramount, that sold content to places like Netflix have now started their own streaming services and let their deals with the older services lapse.

VCRs were replaced by DVRs which are being pushed aside by streaming. Netflix pushed aside stores and DVDs. Online booksellers hurt bookstores, though most now offer online purchasing and during the pandemic offered curbside pickup and some offered virtual author events and readings.

People will return to movie theaters as pandemic restrictions disappear. People who went to bookstores to browse will return too. Students who were learning online for the past year are returning to their classrooms and predictions are that they will be back to a kind of normal this fall. But all of these institutions and businesses are changing because of moves online that occurred either because of technological evolution or pandemic necessity.

I hope the idea of the "last bookstore" is just an idea and that some online service will never be able to make a video about it.

I recently came across an article in Smithsonian magazine that was rather deceptively titled "The iPad of 1935." The illustration above comes from that article and originally appeared in the April 1935 issue of Everyday Science and Mechanics magazine. At that time they were thinking that since it is possible to photograph books and also project them on a screen for examination, that perhaps this would be the way we would read. Their illustration is probably closer to watching a PowerPoint presentation than an iPad, but the idea of putting books on a screen is not just an idea of the 21st century.

That article made me do a search on this blog to see what I have written about ebooks. In 2012, I wrote about digital textbooks ("Can Schools Adopt Digital Textbooks By 2017?") I should have revisited that article in 2017 to see what had come to pass. In 2020, I can say that publishers, schools and students have adopted ebooks and digital textbooks, but there are still plenty of books on paper being used by students.

That 1935 contraption uses a roll of miniature film with pages as the "book." It reminds me of the microfilm readers I used as an undergraduate in the library. As the article notes: "microfilm had been patented in 1895 and first practically used in 1925; the New York Times began copying its every edition onto microfilm in 1935."

It took about 70 more years for handheld digital readers that we use to come on the scene and the transition is still taking place.

Though I have an iPad and a Kindle, my home and office are still filled with paper books and magazines. I would say that the bulk of my daily reading is done on a screen but the screen is on my phone and laptop. When I have taught college classes online or on-site, I have offered texts as ebooks when possible as an option. I still find that some students prefer a Gutenberg-style book on paper.

That 2012 post of mine referenced an article about the then Education Secretary Arne Duncan and Federal Communications Commission chairman Julius Genachowski issuing a challenge to schools and publishers to get digital textbooks to students by 2017.

In 2012, there was a "Digital Learning Day" where there were discussions on transitioning K-12 schools to digital learning and using technology to transform how teachers teach and students learn inside and outside of the classroom. They issued "The Digital Textbook Playbook" guide which went far beyond textbooks and included information about determining broadband infrastructure for schools and classrooms, leveraging home and community broadband to extend the digital learning environment and understanding necessary device considerations along with some "lessons learned" from school districts that had engaged in successful transitions to digital learning. The 2012 playbook can be downloaded and it's interesting to see what has changed in the 8 years since it was written. Those changes would include a new administration with different objectives from the Obama era.

The playbook defines a "true digital textbook" as "an interactive set of learning content and tools accessed via a laptop, tablet, or other advanced device." Being that this effort was on K-12, the perspectives of key users was students, teachers, and parents.

"Cannibals prefer those who have no spines."
Stanislaw Lem