Your smartphone will be smarter than you by the year 2017. That is from an analysis from market research firm Gartner. It won't have much to do with hardware. It will come from the data and computational ability in the cloud. Phones will appear smarter than you - if you equate smarts with being able to recall information and make inferences. It was a part of a discussion of smart devices at Gartner Symposium/ITxpo 2013, November 10-14 in Barcelona.
What made mobile phones smartphones was new tech and apps, Cameras, enabling locations and sensors, and tying them into apps and social interactions via apps has been the biggest trend over the past 5 years. The easier things are already in place - scheduling, sending out reminders, letting you know what friends are doing or where they are, and alerting you to things in your vicinity.

A newer trend is having phones that predict your next action based on personal data already gathered. This is called cognizant computing and many people see it as the next step in personal cloud computing.

Carolina Milanesi, research vice president at Gartner, says “If there is heavy traffic, it will wake you up early for a meeting with your boss, or simply send an apology if it is a meeting with your colleague. The smartphone will gather contextual information from its calendar, its sensors, the user’s location, and personal data.”
Of course, allowing your phone to do these things is part of the equation. And not everyone is okay with granting permissions to apps, opening up their data, and feeling confident in allowing apps and services to take control of aspects of their lives.

This idea of cognizant computing is said to occur in 4 phases. Those phases (according to Gartner) are: sync me, see me, know me and be me.

Sync me is familiar to users and probably appreciated: store copies of digital assets and sync them across devices. So, my iPhone knows what my iPad knows and my cloud documents are on all my devices, including several laptops.

See me is here in its early stages and means devices can track history and context. The phone knows where I am now and where I have been.

Using the data from those two phases (which many of us have granted permissions for), phones can move to phases 3 and 4. That's when things get a bit scary for some people. When my phone "knows me" it acts proactively. Do I want to purchase something now based on my earlier spending habits?

And, taking it a step further, how much do I want my device to "Be Me" and act on my behalf? It will pay my bills. It will send selected friends and relatives birthday greetings and pick out a gift. (After all, I have tied my wife's purchases to my account and it knows where she likes to shop and what she likes to buy.)

Scary? Or are you happy to let that little package of power make your life "easier"?

I still haven't gotten my jetpack or flying car, but I might get some cousin of The Jetsons' Rosie that can slip into my pocket - and into my life - quite easily. 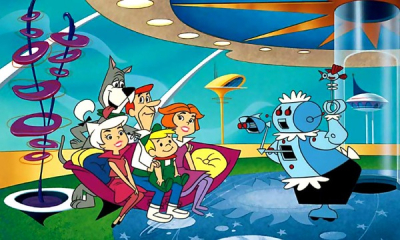 The author does not allow comments to this entry

Teaching Artificial Intelligence in K-12 Classrooms
July 2022
The Metaverse: If they build it, will you come?
June 2022
When the AI Takes Life
June 2022
The Return of the One-Room Schoolhouse
June 2022
Unretirement and Returnships
June 2022
A More Musky Twitter
May 2022
Educating in the Metaverse
May 2022
Consider Your Life in the Metaverse and Multiverse
April 2022
The Disconnected 2022 Edition
April 2022
Emergency Remote Teaching May Not Be Online Learning
April 2022

"I'm so glad I live in a world where there are Octobers."
L.M. Montgomery