"Next Billion" is a term you will find used in talking about the future of the internet. It refers to not only the exponential growth in connectivity in emerging markets, such as India, but also the growth of next-level technology in more mature markets.

One thing that is evident is that the next billion internet users are much more likely to be using mobile phones than a computer.  Globally, half of all internet users got online in February 2017 using mobile devices. It is still a close race with 45% accessing the web on laptops or desktop computers, but break out the number for emerging markets, like India, and the mobile wins easily. In India and other countries that did not have wired infrastructure in place for Net connectivity, and did not have a population able to purchase computers, mobile and wireless are the only choice. Indians accessed the internet through their mobiles nearly 80% of the time.

This is also changing the way providers, carriers, phone manufacturers and related companies (such as Google/Alphabet) design.

For example, the emerging next billion tends not to type searches, emails, or even text messages. These newcomers avoid text and use voice activation and communicating with images. Part of this is due to their unfamiliarity with the devices, and partly it is due to a less educated and literate population. They are using low-end smartphones (Android dominates) and cheap data plans along with the most intuitive apps that let them navigate easily.

What does this have to do with education?

My first thought is that even if your students are part of the "first billion" population, delivery of learning online needs to very seriously address mobile use, and the user interfaces need to be intuitive and less text-based.

No doubt some of this has already been taking place through online learning and especially with the rise of Massive Open Online Courses (MOOC) and Open Educational Resources (OER), but the pathways are not even well established for the first billion, and certainly not for the next billion.

People have been searching for creatures and running down their phone batteries this month since Pokémon Go was released.
Is there any connection of this technology to education, Ken? Let's see.

First off, Pokémon Go is a smartphone game that uses your phone’s GPS and clock to detect where and when you are in the game and make Pokémon creatures appear around you on the screen. The objective is to go and catch them.

This combination of a game and the real world interacting is known as augmented reality (AR). AR is often confused with VR - virtual reality. VR creates a totally artificial environment, while augmented reality uses the existing environment and overlays new information on top of it.

The term augmented reality goes back to 1990 and a Boeing researcher, Thomas Caudell, who used it to describe the use of head-mounted displays by electricians assembling complicated wiring harnesses.

A commercial applications of AR technology that most people have seen is the yellow "first down" line that we see on televised football games which, of course, is not on the actual field.

Google Glass and the displays called "heads-up" in car windshields are another consumer AR application. there are many more uses of the technology in industries like healthcare, public safety, gas and oil, tourism and marketing.

Back to the game... My son played the card game and handheld video versions 20 years ago, so I had a bit of Pokémon education. I read that it is based on the hobby of bug catching which is apparently popular in Japan, where the games originated. Like bug catching or birding, the goal is to capture actual bugs or virtual birds and Pokémon creatures and add them to your life list. The first generation of Pokémon games began with 151 creatures and has expanded to 700+, but so far only the original 151 are available in the Pokémon Go app.

I have seen a number of news reports about people doing silly, distracted things while playing the game, along with more sinister tales of people being lured by someone via a creature or riding a bike or driving while playing. (The app has a feature to try to stop you using from it while moving quickly, as in a car.)

Thinking about educational applications for the game itself doesn't yield anything for me. Although it does require you to explore your real-world environment, the objective is frivolous. So, what we should consider is the use of VR in education beyond the game, while appreciating that the gaming aspect of the app is what drives its appeal and should be used as a motivator for more educational uses. 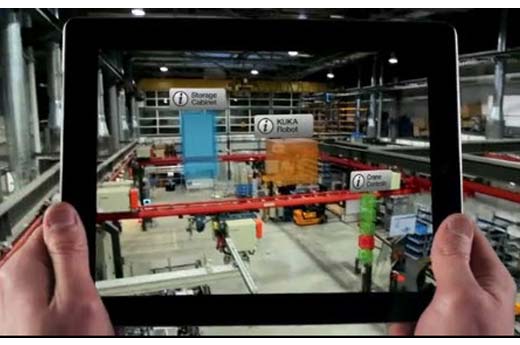 The easiest use of VR in college classrooms is to make use of the apps already out there in industries. Students in an engineering major should certainly be comfortable with understanding and using VR from their field. In the illustration above, software (metaio Engineer) allows someone to see an overlay visualization of future facilities within the current environment. Another application can be having work and maintenance instructions directly appear on a component when it is viewed.
Augmented reality can be a virtual world, even a MMO game. The past year we have heard more about virtual reality and VR headsets and goggles (like Oculus Rift) which are more immersive, but also more awkward to use.This immersiveness is an older concept and some readers may recall the use of the term "telepresence.”

Telepresence referred to a set of technologies which allowed a person to feel as if they were present, or to to give the appearance of being present, or to have some impact at place other than their true location. Telerobotics does this, but more commonly it was the move from videotelephony to videoconferencing. Those applications have been around since the end of the last century and we have come a god way forward from traditional videoconferencing to doing it with hand-held mobile devices, enabling collaboration independent of location.

"The world will not be destroyed by those who do evil, but by those who watch them without doing anything."
Albert Einstein

"I do not fear computers. I fear the lack of them."
Isaac Asimov