I learned about Gordon Moore's 1965 prediction about 10 years after he proposed it. He said that by paying attention to an emerging trend, he extrapolated that computing would dramatically increase in power, and decrease in relative cost, at an exponential pace. His idea is known as Moore’s Law. Moore's law sort of flips Murphy's law by saying that everything gets better.

Moore was an Intel co-founder and his idea was "law" in the electronics industry. Moore helped Intel to make the ever faster, smaller, more affordable transistors that are in a lot more than just computers today. The 2021 chip shortage globally reminded us that cars and appliances and toys and lots of other electronics rely on microchips.

Though the cost of computer power for consumers falls, the cost for chip producers rises. The R&D, manufacturing, and testing costs keep increasing with each new generation of chips. And so, Moore's second law (also called Rock's law) was formulated saying that the capital cost of a semiconductor fabrication also increases exponentially over time. This extrapolation says that the cost of a semiconductor chip fabrication plant doubles every four years.

Huang's Law is new to me. Up front, I will say that this newer "law" is not without questions about its validity. It is based on the observation that advancements in graphics processing units (GPU) are growing at a rate much faster than with traditional central processing units (CPU).

This set Huang's Law as being in contrast to Moore's law. Huang's law states that the performance of GPUs will more than double every two years. The observation was made by Jensen Huang, CEO of Nvidia, in 2018. His observation set up a kind of Moore versus Huang.  He based it on Nvidia’s own GPUs which he said were "25 times faster than five years ago." Moore's law would have expected only a ten-fold increase.

Huang saw synergy between the "entire stack" of hardware, software and artificial intelligence and not just chips as making his new law possible.

If you are not in the business of producing hardware and software, how do these "laws" affect you as an educator or consumer? They highlight the rapid change in information processing technologies. The positive growth in chip complexity and reduction in manufacturing costs would mean that technological advances can occur. Those advances are then factors in economic, organizational, and social change.

When I started teaching computers were not in classrooms. They were only in labs. The teachers who used them were usually math teachers. It took several years for other disciplines to use them and that led to teachers wanting a computer in their classroom. Add 20 years to that and the idea of students having their own computer (first in higher ed and about a decade later in K-12) became a reasonable expectation. During the past two years of pandemic-driven virtual learning, the 1:1 ratio of student:computer became much closer to being ubiquitous. 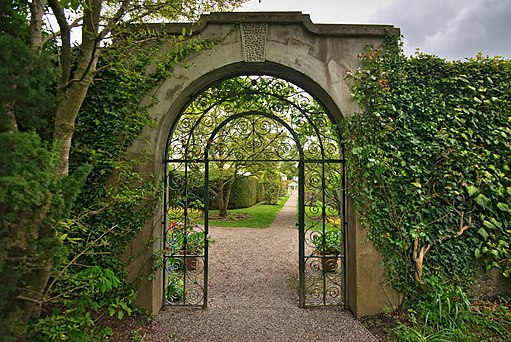 The term "walled garden" once only meant a literal garden that was enclosed by walls.  Though I tagged this post as "tech" and "Open Everything," this topic is not about things being open at all - which of course is a topic of those who discuss openness.

There are literal walled gardens in the world. These gardens are surrounded by walls to keep out animals, unwanted human visitors and in some places, the walls shelter the garden from wind and frost. They can also be decorative and there may be smaller walls within the walled perimeter. These days if you hear the term there is a good chance that it is a figurative walled garden which is a closed platform or closed technology ecosystem. Since we borrowed the term "ecosystem" from nature and have since created manmade ecosystems (or damaged natural ones), it makes sense that we turn botanical garden ecosystems into technology ecosystems.

A tech walled garden is a closed platform or closed technology ecosystem which is a software system wherein the carrier or service provider has control over applications, content, and/or media.With that control, they can restrict convenient access to non-approved applicants or content.

We contrast this with an open platform, wherein consumers generally have unrestricted access to applications and content.

Whether on the broader Internet or a smaller network, a walled garden is a restricted section that only approved users can access. I first encountered this in the earliest days of the Internet with the walled garden of the school nework where I taught. Their server granted access only to students and staff and even that larger walled garden had smaller walled sections withing delegated only to faculty or administration.

It all sounds like something safe - maybe even comfortingly safe. A walled garden can also refer to a closed or exclusive set of information services where a user is unable to leave the closed environment without the owner giving limited points of entry. One example of this comes from Apple’s hardware, software and services work. They work well together as long as you use Apple's devices and services. (see this Wall Street Journal video report)

The Apple walled garden is so closed that it has been targeted for antitrust scrutiny. The recent Epic vs. Apple case is an example of that. The Fortnite video game developer made the case that Apple's walled garden is a monopoly that forces developers to use Apple's in-app purchase system, which gives Apple a 30% cut of all sales.

Walled gardens - literal and figuartive, botanical and technological - have their purposes and will continue to exist, but it is very nice to see gardens and tech ecosystems that are open too.

"Don't educate your children to be rich. Educate them to be happy, so they know the value of things, not the price."
Victor Hugo

"Cannibals prefer those who have no spines."
Stanislaw Lem