Education has been moving online since online became an option. The move took a leap in 2020 when the COVID-19 pandemic forced education online in a much bigger way. Perhaps not as publically, professional learning for educators and also in the corporate world has been following the same timeline. It had been moving online for more than 20 years, but it also took a leap due to the pandemic.

Forbes magazine has said that online learning is the future of professional development. Degree-based programs and learning and development initiatives are expensive. Some employers were surprised at how well employees worked virtually after some ramping up of equipment and skills. Professional learning took a short break at the start of working from home but then moved online along with almost everything else.

The Forbes article points to a number of online learning advantages that make it something that will remain in place when things get "normal" again - which after 18 months hasn't arrived yet. These advantages for professional learning are not unlike the advantages of traditional classroom learning.

Learners/employees discovered that web-based solutions offered flexibility and that they could learn at their own pace (though deadlines and scheduling may still exist). The article states that online requires 40% to 60% less time to complete the same material.

But self-paced learning also requires a lot of reading and time management and not all learners can adapt.

Overall, online learning is more cost-effective for learners, trainers, and employers. You can save on facilities, transportation, printed materials, travel and lodging in some cases, and even catering costs.

However, some of that saving needs to be invested in web-based platforms for learning to reside and that is a sustained investment. Instructional designers and support personnel remain in place but shift their duties to online.

One advantage that departs from traditional online courses is that corporate training often offers more options. Since some of the learner goals are career advancement and some are required skills training, offerings might include "courses" offered outside the employer (such as MOOCs). Employees may want to improve their coding skills. Their employer may want them to do HR training. Topics that are beyond the capabilities of a training department can be outsourced. Accreditations can be tracked across programs.

For a global company, online allows employees from different locations across the globe to access the same training. Asynchronous learning eliminates issues with different time zones.

Flexibility was a quality that companies and learners discovered was more critical than ever during the pandemic. That has always been a key quality for online learning. Many lessons have been learned. More will be learned in the years to come.

In 2011, I made presentations at several colleges about the use of mobile apps in education and teaching in an "app world." At that time, apps were a big topic in the tech world but not a big topic in education. That presentation (it is on my Slideshare site) included the slide below where education doesn't even appear as a category unless you consider it to be part of the 5% of "other" app consumption. Clearly, games and social networking dominated usage at that time and they both still garner a high percentage of app use.

Showing this slide to college faculty reinforced their idea that apps are not for education. Of course, in 2011 apps were also not for common banking and financial use, medical records, and other "serious" computing.

That has certainly changed. But has it changed for education?

Reviewing my own 2011 presentation predictions, I said that I thought apps would come to education in three waves: Adoption, Adaption, and Creation.

Adoption was schools and educators adopting existing apps that had some education features or were designed for education. The obvious one then and now was apps for learning management systems. Blackboard was the first I used but now Canvas and all the other players have them. Adoption was not immediate. The two colleges I worked at then both chose not to offer the mobile version. Faculty could not see how you could possibly take a course on your phone. But I had a graduate student that year who told me that she did her coursework for me on her phone in her free time while she was at her night job. We were using Moodle and she just resized the web pages. I couldn't see how that worked but I knew an app would have made it better.

The second wave was adaption - using apps not specifically designed for education in courses. That was being done by individual teachers as they discovered and bought into the app world. Adaption requires some pedagogical changes. Mobile devices still were not acceptable (even banned) in some classrooms in 2011. It was the rare faculty member who said "Take out your phone..." and asked students to use it for class.

Now in this time of the pandemic, it is clear to schools, teachers, students, and parents how "educational" phones or tablets can be. Schools are supplying tablets the way we once supplied laptops. But even laptops are using apps. I'm sure app downloads are up in the past two months. App versions of Zoom and others have become common tools not only for educators but or personal use.

That move from personal to professional (business or education) use is critical to adoption or adaption/adaptation. As teachers started using their phones and apps more in their everyday screen time, the move to use them for teaching became easier. 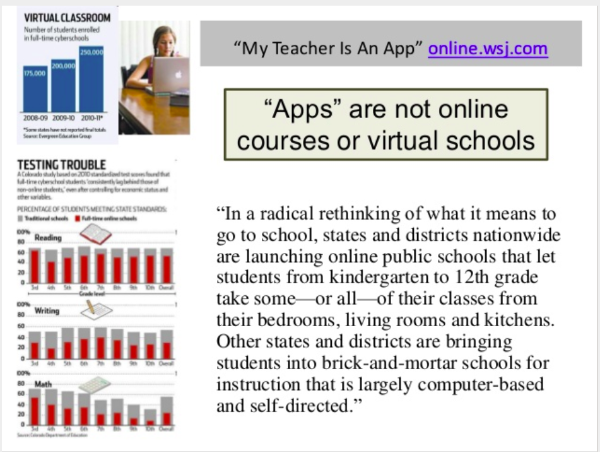 Something that made faculty fearful in 2011

Those 2011 audiences weren't sold on using apps in the first half of my presentation. They weren't using apps for themselves. Some did not have a smartphone. But they were hearing "There's an app for that" from friends, colleagues their students and on television commercials. They knew it was coming.

I caught their interest when I shifted to talking about why - even though I was an app evangelist - apps are NOT online courses or would virtual schools in the near future. (I find that educators generally like the status quo.) There was an article I pointed to that was headlined “My Teacher Is An App.” A provocative headline but the article did follow my point that things were changing but we wouldn't be there for quite a while.

The article said “In a radical rethinking of what it means to go to school, states and districts nationwide are launching online public schools that let students from kindergarten to 12th grade take some—or all—of their classes from their bedrooms, living rooms, and kitchens. Other states and districts are bringing students into brick-and-mortar schools for instruction that is largely computer-based and self-directed.”

I wondered then if apps would be driving curriculum or would curriculum be driving app development. I'm pleased that the latter seems to be generally the case now.

I asked the audience if they believed that this reliance on smartphones and apps will "produce forgetfulness in the minds of those who learn to use it because they will not practice their memory. You have invented an elixir not of memory, but of reminding; and you offer your pupils the appearance of wisdom, not true wisdom, for they will read many Socrates on the things without instruction and written word, will, therefore, seem to know many things, when they are for the most part ignorant and hard to get along with since they are not wise but only appear wise.”

My third wave was just beginning to form in 2011. That was colleges creating their own apps. I had a few examples of colleges adopting and adapting things like parking and events using commercial apps and GPS to navigate campuses or scheduling apps for campus calendars, courses, or facilities scheduling.

But do schools need to create their own apps or just purchase commercial ones that can be branded? I looked back to the development of school websites as an example. Initially, most schools bought a package or a vendor but along the way many schools took it on as an in-house operation, perhaps using some commercial products - a combination of creation and adaptation.

In 2011, may school websites weren't even dynamic enough ready for viewing on phones or tablets. But schools were creating their own apps and courses about how to develop apps were becoming a hot topic.

In 2020, there are plenty of no-code tools for app development (Airtable, Bubble, Zapier, Coda, Webflow) so that it doesn't take a wizard developer to make a fully functioning app.

If you are a teacher or student at any level K-20, the chances are excellent that you are using apps in your courses and on your campus.